(continuedâ€¦) Okay, so the end of the last entry may have been a bit exaggerated suspense for the sake of the writing, nonetheless, the next few days WERE- STINKING AWESOME!

The next morning I woke up around 6:30 I think. I went to the roof for a bit which was gorgeous with the morning mist resting on the huge green hills. I spent a little time with God then went downstairs to be quite surprised.

All of the kids were sitting on the mat and doing homework. They were each working on an assignment of some sort or readingâ€¦ at seven in the morning! I sat on the couch and didnâ€™t really say anything just smiled. One at a time they came to me, hugged me, and said â€œGood morning brother.â€ (I forgot to mention the night before they all hugged me good night, and told me to have good dream.â€)

Then a few of them, one a time, came to me to read to me. They would read different stories, or sections of scripture. I loved it. I miss it.

Breakfast was usually pretty good. Potatoes cooked differently, maybe a banana, hard-boiled egg, As we were eating and enjoying each others company, we heard a sound in the other room. The kids were singing! They continued to sing with the accompaniment of a hand drum and tambourine. After we finished eating, we quickly went in to join them. After a bit more singing, they all went around speaking one at a time in Nepali. After they finished, they then asked us if we had any prayer needs. We shared ours. Then they began to pray. They all prayed at the same time and with much passion. Some raised their voices, some furrowed their brow in focus, and most certainly their voices were carefully listened to by the Father.

After prayer they all got up and lined themselves up in a little formation. They burst into a song. I loved it! Then they did another, and anotherâ€¦ and another. They ended up singing close to 40 songs. As much as I loved them all- I was like â€œWow. Theyâ€™re still going!â€ One nearly made me cry. It talked about overcoming. W-O-W-O!

After music, Mark, Brother Nepal, and I continued to attempt to make some contact through emails and such to keep trying to get the equipment. No luck. A bit later, I joined Bill and Timothy in weeding out the future playground spot. It was quite muddy. Our team also smoothed out the dirt edges and started planning out a retaining wall.

I loved playing with the kids so much. We played soccer, basketball, swung on the old swing set and just whatever. Their energy, joy and spirit is quite contagious. I felt like they made me a better person. Basketball was complete chaos. Pass it once in a while, dribbling optional. More like a light rugby. So much fun! Chaos and I did have fun dunking it on the short goal! haha

The previous day Ruth would take Lori to go smell something nice and then she would lead her to the duck pen where it smelled gross. Then she tried to trick Lori into a eating a chili which she did and ended up being quite hot. So now its my turn. They actually tried some and spit them out. To give them a good time I took a bite of what I found out later was pretty big one. I only bit into half of it and at first yelled just for drama but quickly my mouth filled with fire. It was seriously extremely hot. My taste buds over the last year seemed to have been able to stand more hot things, but this was a lot. I went to my room found a Cliff bar and after some water and like 20 minutes it finally started to calm down. Quite hotâ€¦ but totally worth it.

Later that afternoon our order of bamboo came in and so we unloaded it all and dragged it down the hill and quickly found a little shortcut where we slid it down a section of the hill. It was hard work but honestly sliding that bamboo down that hill was pretty fun!

I think this night was when we had these fajita type things. Spicy meat in a tortilla thing with some sauce. â€œMmmm Mrs. M- this is delicious!â€ In Nepalese I would say something like â€“â€œkhaanaa Dherai mitho chhaâ€ which translates like- this food is delicious! ïŠ

After dinner we sang a bit more with them, I got my guitar out and played for them as they sang their songs. I played my song â€œAbbaâ€ for them, which was cool to me singing about the Father to a group of orphans. Not sad, just cool. I love Jesus. Those kids are beautiful.

Before bed, I talked with Jen and Lori for a bit. Got laughing a while too. Ha. Good times! Our quote book was filling up pretty quick.

Sorry I donâ€™t have anything suspenseful to end with except that the next day was extremely eventful and memorable. 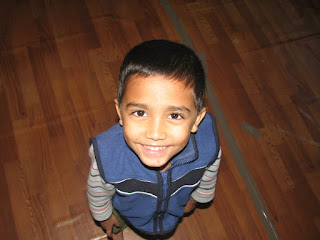 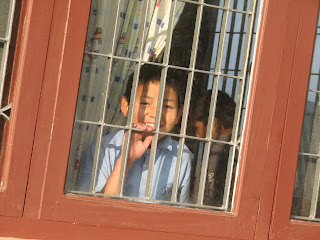 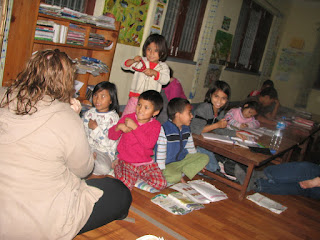 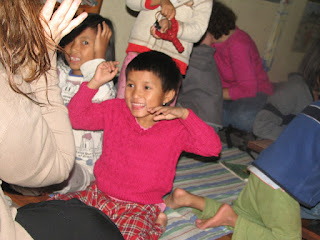 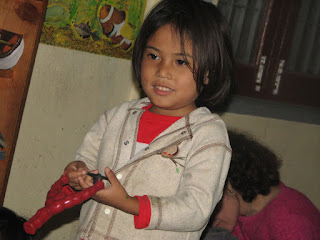 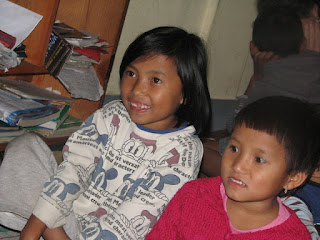 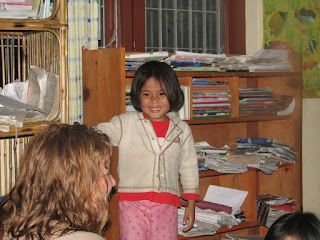 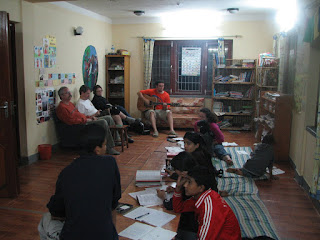 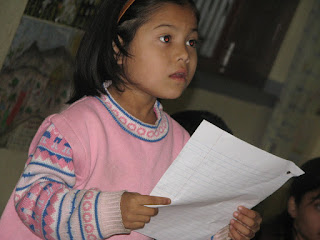 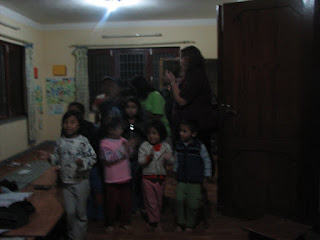